m2m was founded in Cape Town in 2001, by Dr Mitch Besser. Gene Falk and Robin Smalley are our co-founders. 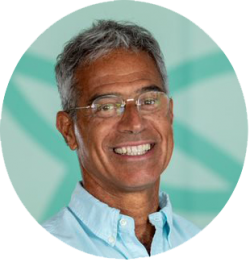 A Harvard-trained obstetrician and gynaecologist, Dr. Mitch Besser has dedicated his professional career to the public health needs of women. In 1999, Mitch joined the University of Cape Town to assist with the development of services for pregnant women living with HIV to prevent mother-to-child transmission of HIV (PMTCT). When he discovered that many women who tested positive for HIV were too frightened to return to a clinic for treatment, Mitch founded mothers2mothers (m2m) to provide peer-to-peer education and support to help women access lifesaving PMTCT services. From administering the programme from the back of his car and a single site at Cape Town’s Groote Schuur Hospital, he has been part of m2m’s growth into a global leader in efforts to eliminate paediatric AIDS and create healthy families and communities.

Among the many awards that m2m and Mitch have received are the Global Health Council’s Best Practice Award, the Skoll Award for Social Entrepreneurship, and the U.S. Presidential Citizens Award of the United States Government.

In 2014, Mitch launched AgeWell Global, which adapts m2m’s peer-to-peer approach to employ older adults to improve the social well-being and physical health of other seniors. He also remains an active advisor to m2m’s Senior Management Team and serves on our South African and U.S. Boards. In 2002, Gene was a senior executive with a record of launching groundbreaking ventures at major media companies including HBO and Viacom; he also had a long history of activism with HIV/AIDS and LGBT causes.

That year Gene visited long-time friend/college roommate Mitch Besser in Cape Town, just after m2m’s launch. When Gene returned to his job as a Senior Vice President at Showtime, he also began to work on behalf of m2m, and soon had arranged a short sabbatical to return to Cape Town and help Mitch flesh out the plans for m2m’s future. His planned six-week stay turned into six months.

Returning to New York, Gene set about organising a permanent move to South Africa. Meanwhile, he dedicated himself to developing m2m’s presence in the US, securing funding while recruiting and heading a Board. A year later, in 2005. Gene relocated to Cape Town to become m2m’s CEO, a role he held until 2012.

Under Gene’s leadership, m2m became a globally recognised institution, rapidly scaling its programs and impact without compromising its vision. m2m received wide recognition and numerous awards for its innovation, program delivery and leadership in public health, while Gene’s honours included the Skoll Award for Social Entrepreneurship, Wharton’s Alumni Award for Social Impact and an invitation to speak at the World Economic Forum in Davos.

Gene currently heads Falk Advisors|DGB, which helps corporations as well as foundations and philanthropists with a private-sector perspective to realise the best possible results from their not-for profit partnerships. Robin Smalley enjoyed an award-winning career as a television producer, director and writer before realising that the legacy she wanted to leave had nothing to do with entertainment. Turning her attention to the non-profit world, she became the Executive Director of The Media Project, incorporating messaging around reproductive health into some of the most popular U.S. television shows.

In 2004, a visit to long-time friend Mitch Besser led her to uproot her family to South Africa to join mothers2mothers as its first Executive Director. In this role, she played a pivotal role in scaling the Mentor Mother Model and attracting sustainable funding. In 2005, she returned to Los Angeles as Director of m2m U.S., where she expanded the organisation’s funding base and developed key global partnerships.

Robin’s work on behalf of Africa’s mothers has been recognised in a number of books—including Laura Bush’s memoir “Spoken from the Heart,” Kenneth Cole’s “Awareness,” and Harriet Cabelly’s “Living Well Despite Adversity,”—and highlighted venues from the White House to the Clinton Global Initiative Conference.  In her current position as m2m U.S. Chief Connector, Robin supports fundraising, partnership development, advocacy, and programme strategy. She serves on the m2m Board of Directors, is a member of the Directors and Writers Guilds of America and says her greatest accomplishments are her daughters, Hannah and Sophia.