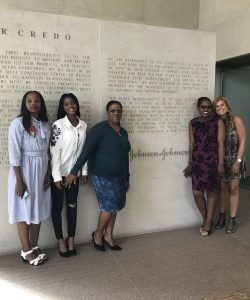 Johnson & Johnson is mothers2mothers’ (m2m) longest-standing corporate donor. Following a visit to one of our sites in the Eastern Cape of South Africa in 2005, Johnson & Johnson became one of the first to recognise m2m’s potential to change the trajectory of the HIV pandemic and made a first grant of almost $100,000 later that year. This first award was earmarked for m2m to work with pregnant and post-natal women living with HIV and their children in East London, South Africa.

This marked the start of a partnership that has now spanned more than a decade. As well as investing over $15M in m2m since then, Johnson & Johnson has provided m2m with technical assistance and thought partnership, as well as access to high-profile platforms to share our successes and garner further support.

Here are some highlights that Johnson & Johnson’s support has made possible: