World Tuberculosis (TB) Day is celebrated every year on 24th of March to raise public awareness about one of the deadliest infectious diseases. TB claims approximately 1.4 million lives every year, even though it is both preventable and curable. Interestingly, it is also the anniversary of the discovery of the bacterium that causes TB in 1882, which was led to an understanding of how to diagnose and cure the disease. Unfortunately, TB is a disease that mothers2mothers (m2m) is all too familiar with. To understand the health and social impact of TB on the women we employ as Mentor Mothers and their clients, we turn to Relebohile Leoatha, a 30-year-old Community Mentor Mother from Lesotho who was diagnosed with TB over a decade ago.

At the time, she was no stranger to stigma and judgemental stares from her peers and the community—having fallen pregnant at the young age of 15 and dropping out of school for a time to assume ‘’wifely duties’’ as a young bride. But, as Relebohile recounts, being diagnosed with TB is a mentally draining and tiresome process on its own.  From 2009 to 2011, she displayed TB symptoms but each time the tests would come back negative. Finally, the tests came back as expected, which meant that she was able to begin her treatment regimen.

Being known as the one with TB on top of living with HIV also brought its own heartache for Relebohile. It seemed to her that people were more scared of TB because it is airborne, and that meant that she was viewed as the human TB carrier. ‘’I was back in school in 2009 when I first showed symptoms, and other students didn’t want to come near me. The isolation I felt was compounded by my impressionable age at the time—I was young, and all teenagers yearn for affection and acceptance from their friends,’’ admits Relebohile.

Even though Relebohile may have felt shunned and isolated, she certainly was not alone.  Sub-Saharan Africa bears the highest global HIV/TB burden, with over 50% of people diagnosed with TB also living with HIV. Lesotho has one of the highest TB rates in the world, with an estimated 724 cases per 100,000 people, and 73% of people who contract TB are also living with HIV.

That is why the work that Mentor Mothers to educate their clients about TB and pre-screen them is so important. Mentor Mothers ask the clients if they’ve experienced any TB symptoms such as cough with blood, weight loss, weakness, fatigue, and night sweats. If they do, they are then referred to a nurse or doctor for a thorough test where samples are sent to the lab. 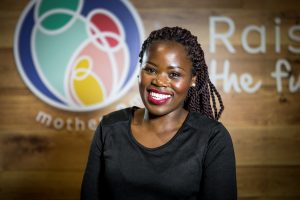 ‘’At this time I don’t have any clients who have TB, but in the past I’ve had them and I’d advise the whole family to get tested because this is a communicable disease that can only be treated with the right medication. I always tell my clients who contracted TB that I’m living proof that the road to recovery starts with acceptance. Accept your HIV status and accept that for now, you have TB but that won’t last forever. Don’t default on your treatment and don’t miss a single day – take it for the prescribed time, and six months from now when you test negative for TB, we’ll be looking back at this moment with a smile because of your resilience’’, Relehobile says.