“I was brought up by a single mother in a humble family. I am one girl among four boys. She could not afford to pay tuition for all of us. So, I had to look for my own way of surviving. That’s what made me vulnerable to HIV infection.” – Cissy Mirembe, Uganda

On 8th – 10th of June, leaders from countries, businesses, and civil society organisations will gather (virtually) for a high-level meeting (HLM) on HIV/AIDS, hosted by the United Nations. mothers2mothers (m2m) has been accredited to participate in the meeting, and we will use this platform to urge world leaders to commit to turning an ambitious political declaration into decisive action. This will be critical to achieving the Global Goal of ending the HIV/AIDS pandemic by 2030. Mentor Mother discussing HIV treatment with a client in Malawi

In the 40 years since the first cases of HIV/AIDS were identified, significant progress has been made to turn the tide. The combination of advances in effective and inexpensive treatment options, ground-breaking prevention programmes, and truly remarkable global collaboration has resulted in the number of AIDS-related deaths falling by 43% in the last decade. However, progress has been highly uneven, with some populations still experiencing persistently high infection rates.

As a result, stories like Cissy’s are still a daily reality in Uganda, and across the sub-Saharan African nations where m2m works. Adolescent girls and women in the region are disproportionately impacted by HIV/AIDS, due to profound gender and income inequality, stigma and discrimination, gender-based violence, and lack of access to health, education, and other essential services. These inequalities translate into devastating effects. In sub-Saharan Africa, adolescent girls and young women (age 15-24) are twice as likely to be living with HIV as their male peers (UNAIDS). In Uganda, the situation is particularly bleak, with HIV prevalence among young women four times higher than among young men (UNICEF).

Cissy attributes this ongoing crisis to deeply ingrained cultural norms that put decisions about the health and lives of women largely in the hands of men: “It is not easy being a woman in Uganda. We are often seen as inferior to men. Many women live in extreme poverty and are the most marginalised in society. That makes it difficult for women to stand up for their rights and needs. An example of this is that women can’t say no to unprotected sex. It’s the man who decides whether to use condoms or not.”

The link between inequalities and HIV/AIDS has been recognised by many policymakers in the lead up to the HLM, most notably UNAIDS. The organisation has released a bold new strategy designed to close inequalities and address social determinants that are fuelling the AIDS pandemic by putting the people and communities most affected by HIV/AIDS at the centre of the response. Its goal is to aggressively lower new HIV infections and AIDS-related deaths and get the world back on track to end the HIV/AIDS pandemic by 2030. This ambitious strategy comes at a critical time as COVID-19 is putting additional strain on already under-resourced health systems and threatening even further disruptions in HIV services and treatment to vulnerable populations. COVID-19 has reminded us, again, that pandemics do not respect borders, races, or genders, but that it is always the most marginalised who bear the brunt. The current inequalities in the global vaccine roll out bear witness to this. COVID-19 may also be behind concerning new data that shows that, for the first time since 2003, new infections among children aged 0–14 have risen slightly in sub-Saharan Africa. 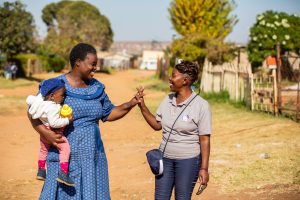 At m2m, we are heartened by growing global recognition that ending inequalities through community-led initiatives is essential to ending AIDS. For nearly two decades, m2m has demonstrated the power of community-based female leaders to respond to the exact needs of communities, resulting in real and tangible change. The 1,800 women living with HIV employed by m2m as frontline health workers, called Mentor Mothers, understand first-hand the barriers to health facing their communities, having overcome their own challenges. They now lead by example — showing their clients that they are neither powerless nor alone, and inspiring and supporting them to access life-saving health services and stay on treatment and in care.

m2m’s model is having a dramatic impact. In 2019, we achieved virtual elimination of mother-to-child transmission for our enrolled clients for the sixth consecutive year, and only 0.08% of pregnant or breastfeeding women who were HIV-negative when enrolled in m2m’s programme contracted HIV in 2019 — 45 times lower than a 2020 estimate of the rate across sub-Saharan Africa (3.6%). Knowing that these results are possible, we wholeheartedly endorse UNAIDS’ call for 80% of service delivery for HIV prevention programmes for key populations and women to be delivered by organisations led by communities, key populations, and women by 2025. 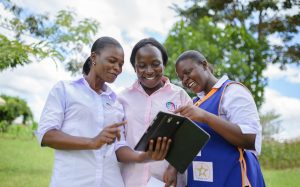 Cissy has been an integral part of m2m’s community-based solution for over a decade as one of m2m’s first Mentor Mothers in Uganda, where she frequently shares how she overcame being discriminated against by her family when they learned about her HIV status. Now, as a Programme Assistant, Cissy trains new Mentor Mothers on how to support adolescent girls and women to overcome their own challenges. Mentor Mothers also help women take greater control of their health and lives by teaching them financial literacy, promoting income-generating activities, and running savings and loans programmes.

Men need HIV/AIDS support, too. For their own health and wellbeing, and to ensure they can be good partners…in sickness and in health. Cissy says Mentor Mothers are using their deep understanding of their communities to change societal attitudes, one man at a time, by talking to them directly about their female partner’s health and well-being. “It’s not easy, especially when you find a man who is at work. The reception might not be all good, with him thinking that a woman can’t tell him something. But the Mentor Mothers know how to talk to these men and they usually manage to open their eyes and minds by the time they are done.”

Cissy’s journey and commitment, and m2m’s journey and commitment as an organisation, is emblematic of where we are in the global HIV/AIDS response. We have proven what works, we know what it will take to end the HIV/AIDS pandemic by 2030, and the UNAIDS strategy provides the world with a roadmap to delivery. We now need world leaders to adopt an ambitious political declaration this week. More importantly, they must transform the declaration from words on paper into decisive, real-world action, with a laser focus on the groups most affected by persisting inequalities in the response. #EndAIDSby2030!