On Friday 19th of March, we were thrilled to be part of one of the biggest days of philanthropy in the U.K. — Red Nose Day. Hosted every two years by U.K. grant-making charity and long-time supporter of mothers2mothers (m2m), Comic Relief, this much-anticipated event raises substantial funds and awareness for charities in the U.K. and around the world. This year, m2m was selected to share the story of one of the 1,700 incredible women we employ as Mentor Mothers across sub-Saharan Africa during the “Night of TV”—a four-hour live programme aired on BBC 1, and the culmination of this big day. 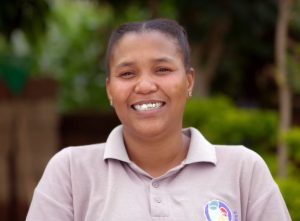 And who better to share the life–changing and vital impact of Mentor Mothers than Velna Malobola, an m2m Mentor Mother from South Africa?

Velna first met m2m in 2008, when she became pregnant with her first child at just 18 and tested positive for HIV. She was afraid to disclose to her family, and when they found out, they shunned her. If it weren’t for the m2m Mentor Mothers at her local clinic, she would have been completely alone. Instead, Mentor Mothers shared their own journey and experiences and supported her to start her treatment and ensure she would give birth to an HIV-free baby.

“If it wasn’t for them, I don’t know if I would have accepted my status. It’s because of them that I can speak freely. mothers2mothers truly did educate and support me. I felt more free with them. I took the right steps to keep my child HIV-free, (and) with mothers2mothers’ help, I’m proud to say my boy is HIV-free today.”

Velna is an unstoppable force of nature—she joined m2m in 2012 as a Peer Mentor because she wanted to educate adolescent girls and young women in her community about HIV and sexual and reproductive health, and support them to make healthy life choices.

From client to spokeswoman, Velna is very grateful to have crossed paths with m2m:

“I love that the mothers I help are one big family… I meet some of them in town and we’ll catch up and they’ll tell me their child is HIV-negative and attending school… it makes me proud to see what a great job I’m doing.” 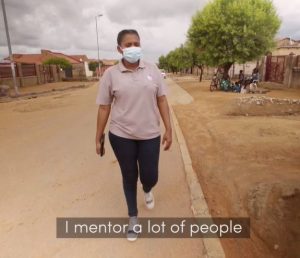 Mentor Mothers like Velna know what it’s like to be in their clients’ shoes because they have been there themselves and understand the health and social challenges that their clients are confronted with. You can read more about her story here: Comic Relief | Meet Velna

Without supporters like Comic Relief and Red Nose Day, none of this would have been possible. Comic relief has generously supported m2m since 2010 and have been instrumental in helping us to pilot our first peer mentor adolescent programme in South Africa and launch our work in Ghana in partnership with British Airways’ Flying Start initiative.

If you want to receive more inspiring stories and exciting news like this straight to your inbox, click here to sign up to our newsletter: Get Involved